Wow...so it's been almost 2 months since my last post...what have I been up to in that time that kept me from posting? Nothing really. I just either had nothing to say or really didn't feel like posting anything.

Halloween was fun...if you consider trying to pound plastic stakes into hard ground to decorate the yard, ending up with a finger that's still sore off and on (some kind of arthritis maybe? Who knows...), and having a kid end up bleeding because she tripped when the hem of her costume frayed (she was actually willing to go back out after getting cleaned up and bandaged, but when she fell again before getting to the sidewalk, she was done).

Thanksgiving was nearly a week long when everything was said and done. Had dinner with one side of my family the weekend before Thanksgiving and the other side on the actual day of Thanksgiving. Then, on the 28th of November, I bought myself a van! I had been saving up for and looking for a good deal on one since about June. It's a '99 Mercury Villager (Estate edition). It's pretty sweet. Two-tone maroon and gold exterior, grey-ish interior (leather seats! Brrrrr!), heated side mirrors, sun roof, luggage rack, trailer hitch mount (just have to find balls with the right size/shape adapter before I could actually tow anything). It's got a few things that needed/need/could use work. It needs a new motor and arm for the rear wiper, the display for the radio doesn't work (not really a big deal...although somehow it was working today on the way into work while I was freezing my rear end off), and I had to have a hose replaced in it right away because it had a hole and was leaking coolant which smoked and smelled nasty when the engine heated up. This is the first vehicle that's really MINE! My name is on the title, it's on my own car insurance, and I can add whatever "silly" stuff to it I want (like seat covers if I can find ones I like that I can afford, steering wheel cover, various organizers, etc). Very excited...and hopefully it won't need too many repairs too soon. Kind of bad timing to get it (even though I had been saving up particularly for it, I could've used some of that money for Christmas presents), but I just couldn't pass up the deal I was getting on it. Will just have to be a little more careful of how many/how expensive the gifts I get for everyone are. 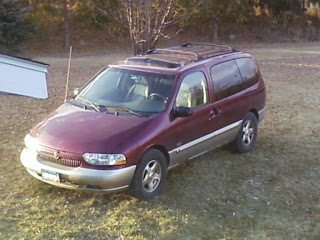 My Van (the one pic I took of it before the ground was covered with icky, COLD, white stuff [SNOW])
Posted by Ashley at 2:32 PM

Email ThisBlogThis!Share to TwitterShare to FacebookShare to Pinterest
Labels: blogging at work, MY VAN, rambling

Ashley
There isn't much to say about me, I'm pretty boring. My family, however, is crazy.